HomeInvestingUnderestimate the U.S. Economy at Your Own Risk

Underestimate the U.S. Economy at Your Own Risk


A number of years ago I was sitting in the conference room of a nice hotel pitching two very wealthy brothers.

These rich gentlemen were worried about massive government debt loads, the potential of defaults on that debt and how it could bring down the entire financial system as we know it.

We went back and forth with them for hours covering historical market scenarios, which strategies worked and didn’t work at certain times and how to create a durable portfolio that can work under a wide range of outcomes.

No matter what we said they simply couldn’t become comfortable with how risk assets would perform under a number of awful left tail market crash situations. Alas, they couldn’t get over the fact that every single investment comes with risks.

Unfortunately, after diversifying and creating a plan that fits within your risk profile and time horizon, you have to take a leap of faith, accept the inherent uncertainty in the future and then follow your plan come hell or high water.

At a certain point, you have to have some faith that things are going to be better in the future.

This is something the wealthy brothers simply didn’t believe.

If things don’t get better over the long run, what’s the point of investing anyway?

Yes, bad things can and will happen. There will be recessions, wars, pandemics, natural disasters and who knows what else. Bad stuff has always happened and will always happen.

That’s just the world we live in.

Yet even when you include the bad stuff, the progress we’ve made as a species over time is magnificent.

Kenneth Pringle at Barron’s recently shared some amazing statistics about the resiliency of the U.S. economy:

When the Covid-ravaged economy contracted in 2020, it was just the 19th time since 1920 in which real gross domestic product had declined, year over year. And nine of those years came between 1930 and 1949, a result of the Great Depression or post–World War II demobilization.

I was born in 1981 (in the midst of a recession no less). Gross domestic product was roughly $3 trillion at the time. It’s now over $23 trillion, a more than six-fold increase in my 40+ years on this planet. 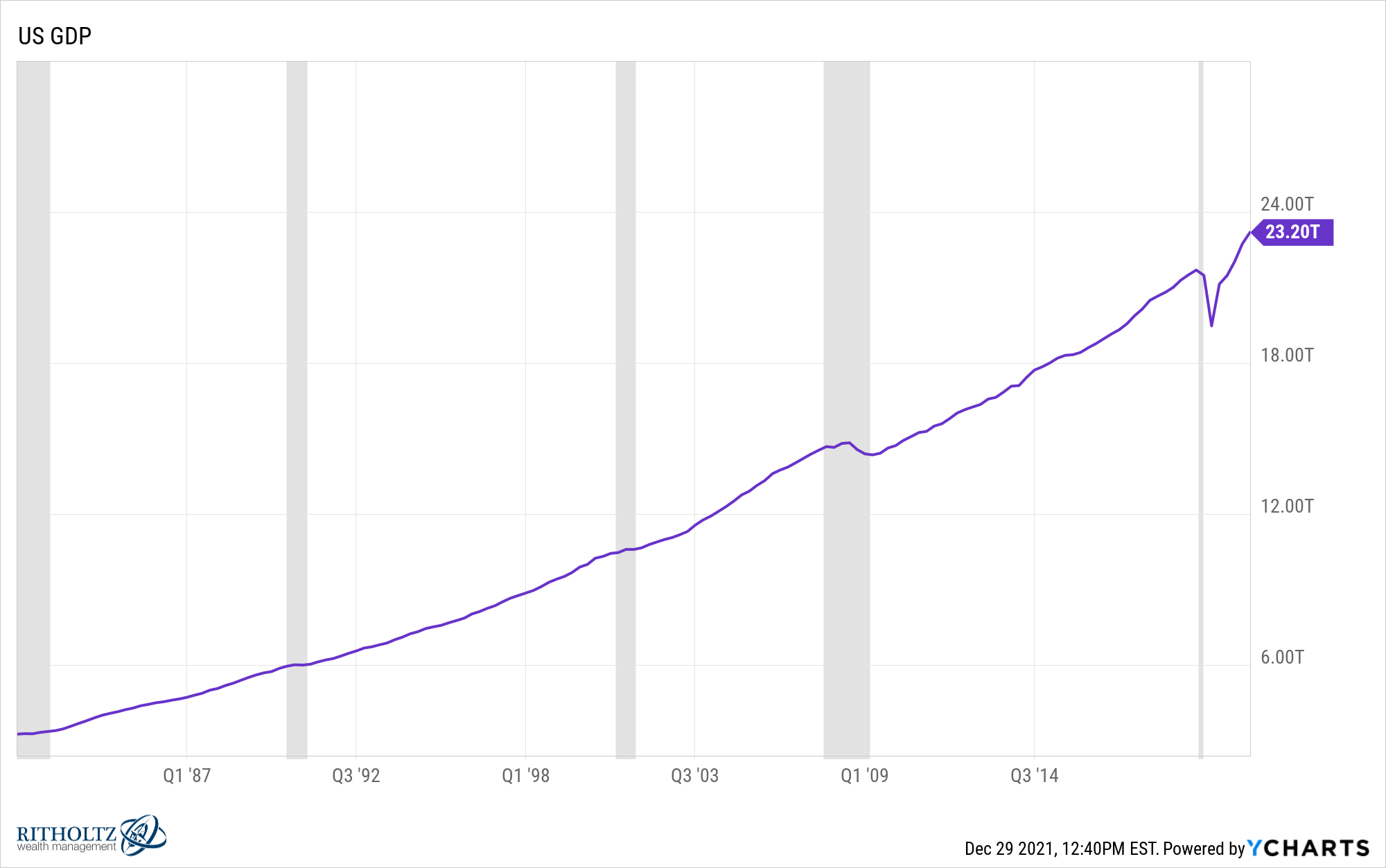 And look at how smooth that chart is despite five recessions and numerous stock market crashes.

In October 2008 Warren Buffett told everyone he was buying stocks. 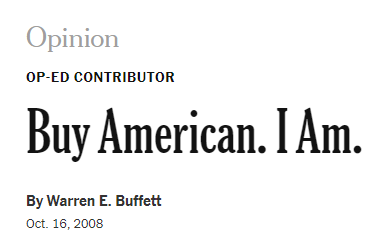 Depending on how you think about time horizon, this was either way too early or good timing.

It was too early in the short-term because the stock market fell more than 30% from those levels before bottoming in March of 2009.

But it was a wonderful call for the long-term considering the U.S. stock market is now up nearly 600% from that day.

Regardless of the investing implications, the thing that stood out to me from Buffett’s piece had less to do with market timing and more to do with how to view the long-term prospects of the United States:

Over the long term, the stock market news will be good. In the 20th century, the United States endured two world wars and other traumatic and expensive military conflicts; the Depression; a dozen or so recessions and financial panics; oil shocks; a flu epidemic; and the resignation of a disgraced president. Yet the Dow rose from 66 to 11,497.

Maybe our best days are behind us. Maybe it will be impossible to see the same amount of growth going forward. It’s certainly possible.

I choose to believe that most people will continue to wake up in the morning looking to improve their lot in life.

People have been betting against the U.S. economy for decades. They’ve never been rewarded for it.

Progress is in our DNA. Good luck better against it.

Michael and I discussed the resilience of the U.S. economy and more on this week’s Animal Spirits:

Further Reading:
How the U.S. Consumer Became the Most Resilient Force in the Economy

Los Angeles bans new oil and gas wells, will phase out old ones